Following the arrival of the high speed train from Amsterdam, the entire station district of Breda has undergone a complete urban renewal. The new world-class station terminal now bridges both sides of the rails, connecting the previously isolated northern side of the city in a seamless way to the historical centre. That gives the chance to redevelop the (former industrial) sites situated north of the rails into a prolongation of the city centre, a new meeting place of the city. 5 TRACKS is one of them, forming the final piece of large scale development on the west side of the station. It accommodates a mixed program with living, working, recreational and commercial facilities. The high density and varied program creates a dynamic city environment which promotes the sharing of facilites by different users and urban encounters.

5 TRACKS is designed as an ensemble of three buildings with two identities: one towards the city and one towards the railway. At the north side, along the new Stationslaan, the ensemble presents itself as a continuous city wall that relates in scale, material and height to the oppositely situated neighborhood Belcrum. At the south side, along the train tracks, it features a sequence of higher triangular buildings in a park, aligned like a zigzag “hedgerow landscape”. The design follows closely the guidelines of the masterplan by Claus and Kaan architects, which envisioned the “hedgerow landscape” along the railway as a means to create a qualitative entrance to the city. This artificial scenic landscape formed by buildings and vegetation elements in the park ensures depth and a layered perspective for the train passenger and a green buffer for the users of the buildings close to the rail.

facade towards the city

facade towards the park

The spatial and programmatic organization contribute to the two-sided orientation of the plan, activating both the street side and park side. A unitary plinth with bars, restaurants and other commercial functions towards the Stationslaan makes for a lively route in between the station and the Court building, situated further to the West. Behind it and stretching until the rails, a parking garage occupies the entire ground floor. On top of it, three triangular building blocks house offices and the hotel. Their northern façades build up the 16m tall profile towards the Stationslaan, while the southern façades create the zigzag “hedgerow” structure, which opens up with collective facilities towards the park. The triangular blocks are topped by V-shaped slabs towards the park which contain different types of apartments and hotel rooms. These are all oriented to optimally profit from the sun and view towards the historic centre of Breda and make use of the collective gardens on the roof of the triangular blocks. 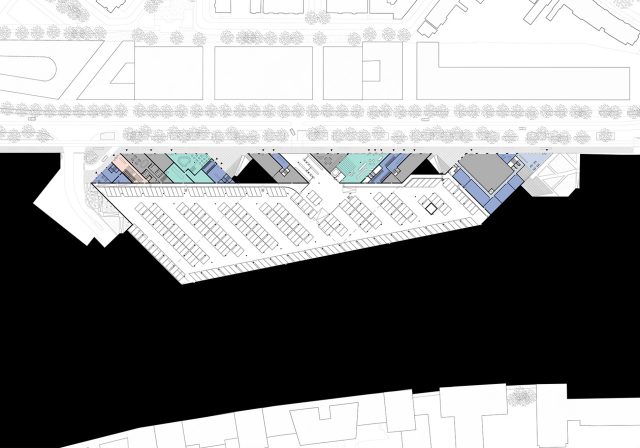 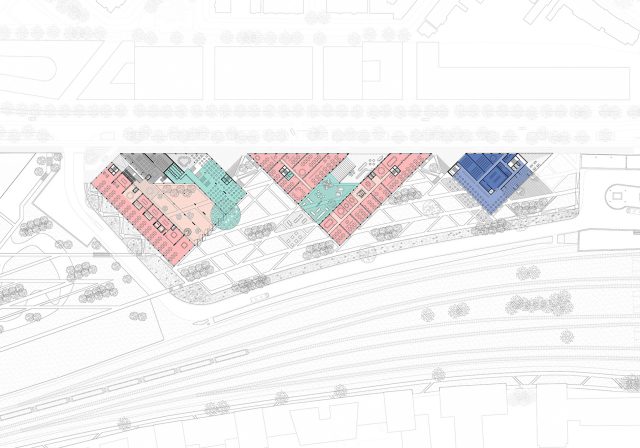 One of the challenges of the project was to make sure that the park is not just a decorative piece of green trapped in between the buildings and the rails, but an integral part of the city.
The organization of program in three distinct buildings leaves room for generous connections between the Stationslaan and the higher situated park. The height differences are bridged by inviting stairways and ramps where the vegetation is literally pulled down to announce the park at the street level. The parking deck is covered with a 50cm -90cm earth substrate in which a vegetation of grasses and groups of birch trees are ordered to form the hedgerow structure. Several thematic squares featuring terraces, outside working and meeting places charge the park with activity.

view from the park

view from the Stationslaan with public connection to the park

section through the park

Additional to the public connections in between the volumes, each buildings has a central atrium which relates to both the park and the street. The atria are conceived as voids sculpted in the building mass and separated from the outside with very transparent facades, so that indoor and outdoor run seamless into each other and the park and the city literally meet. The various collective facilities situated here provide synergetic moments where the resident, the entrepreneur and the passerby come in contact with each other.