The brand new boulevard of Scheveningen lacks a clear ending at its south side. The promenade runs dead into a rather desolate area with a sport beach, a harbor and a sort of free zone of parked cars and a surfers village. The sport beach has little articulation, consistency and allure.

During the summertime several national and international beach tournaments are held in a temporary stadium on the beach. The current stadium lacks charisma. It’s a closed structure with an uninviting facade. The municipality wants to explore the possibilities of a temporary stadium that will be able to activate the beach year round.

Peter Blake - The meeting or Have a nice day Mr. Hockney

This project transforms the current sports beach into a ‘Beach City’ that bundles beach and sea related sport facilities, both existing and new. Beach City activates the southern end of the Scheveningen boulevard with a sportive hotspot that functions on a regional scale

activities zoning according to the soil surface

The design introduces a fixed and permanent armature for flexible and temporary Beach City developments. This armature consists of the prolonged boulevard that is deformed into a toothed shape in order to enhance its relation with the beach and to create docking stations onto which a flexible set of plug-and-play facilities will be attached. These facilities differ in time, according to season, demand and event calendar. The armature itself incorporates permanent facilities such as toilets, locker rooms, showers, storage spaces, a bar/restaurant and a water sport coordination center. 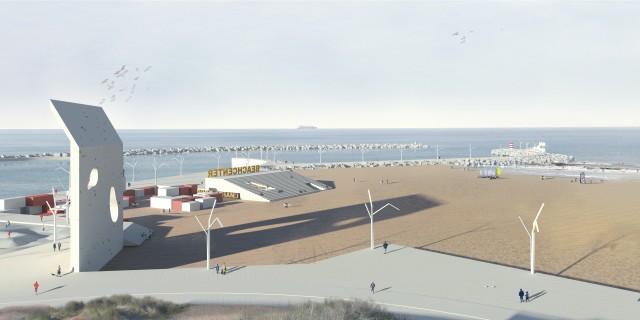 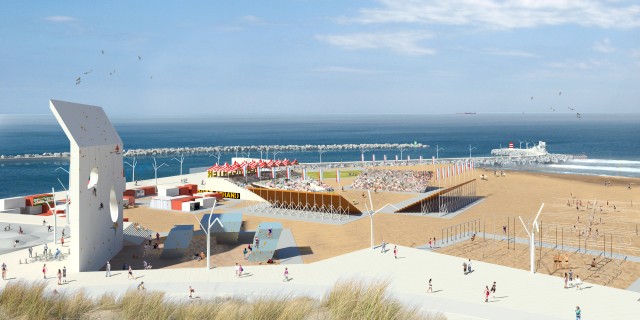 Sports beach seen from the boulevard 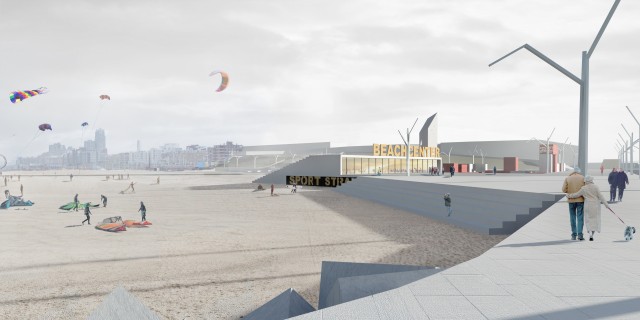 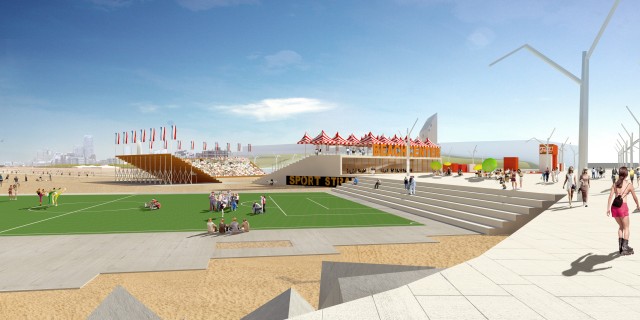 Sports beach and beach stadion seen from the harbour pier

Beach City accommodates a large variety of plug-and-play facilities: both new and existing, both public and private, both beach and water related, both temporary and semi-permanent. The surfers village and the beach stadium will be the main players that are already active in the area. Potential new plug-and-play facilities consist of a muscle beach, a climbing beach, a skate facility, a tidal swimming pool and a multi sports field. Many of these facilities will reduce in size or entirely disappear in winter. Then beach city will again be the domain of the hard core kite and wave surfers that have appropriated the site in the first place.

lido on the harbour pier