Rozemaai at home is a plan for 140 social houses, 30 medium-priced houses, a day care center, commercial facilities and an array of public spaces. The site is part of Rozemaai, a postwar extension district of Antwerpen in modernist tradition, that is undergoing a massive transition. A masterplan by Buro Lubbers for the whole district includes a new natural park along a re-opened creek, the Donkse Beek. The jury, chaired by city architect Christiaan Rapp, praised the way our winning entry – At Home in Rozemaai – relates to the fragmented urban context and in particular to the new landscape of the creek’s valley.

The main contradiction in social housing today is the tension between the necessity for standardization on the one hand and the need for identity on the other. Housing blocks, urban spaces, buildings and units should all be the same for financial reasons and all be different for socio-cultural reasons. Team BOGDAN & VAN BROECK and Shift A+U has chosen to explicitly use this ambiguity in the urban scheme, the building typologies and the architecture of their project for Veld 15a in Rozemaai.

Currently Rozemaai lacks any kind element in the public space that embodies the idea of community. The question therefore is how can we create a home, both on the level of the city and the house, that combines the suburban living qualities with a landscape design that is based on strong ecological connections and accessible green spaces of quality.

“Rozemaai at home” is the result of a search for an environment in which houses and inhabitant are part of larger whole, a Habitat. Neither the modern city with its isolated machines for living nor the traditional city with its perimeter blocks, streets and squares, provide the answer in the context of Rozemaai. The answer lies in residential buildings and inhabitants that relate in an alternative way to one another, to the ground and to the landscape.

situation along the stream valley

The urban scheme consists of an ensemble of solitaire blocks and slabs which together form clearly defined public spaces that balance between open and enclosed. Because of their clear definition, hierarchy and function these so called outside rooms are clearly different from the flowing and desolate public spaces of the modern city around. At the same time this new urban fabric offers enough openness for the creek valley to be experienced from the houses and for this water landscape to physically enter the project. In this way the most important feature of Rozemaai, its creek valley, becomes an integral part of the daily living experience of the new inhabitants. 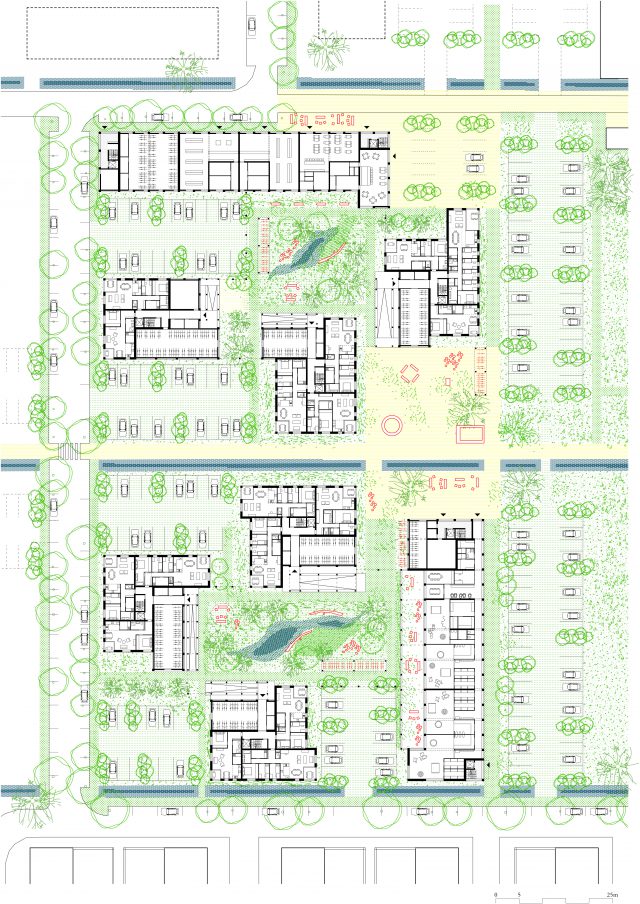 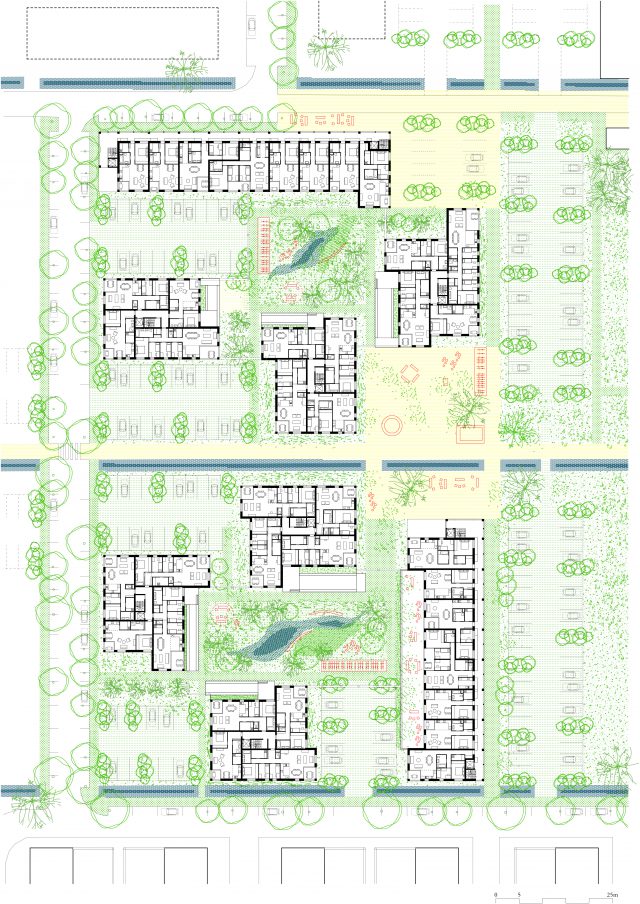 The proposed buildings have a relatively fine grain size. This results in public spaces and housing blocks with a human scale that allow for appropriation and identification by the inhabitants. It also leads to apartments with a lot of living quality in terms of light and view. All apartments in the blocks are corner apartment with a two sided orientation that offers views of two different outside rooms. The galleries in the slabs are relatively short and they are loaded with so called see-through apartments.

The outside rooms are clearly different in scale, function and degree of openness. The parking program is distributed across several small green parking’s along the perimeter of the site. In this way, large and desolate parking fields are avoided and in time, when car sharing becomes the norm, they can step-by-step be replaced by green. Each housing cluster has a central court with an enclosed character. The intimate quality of these residential courts is enhanced by a system of pergolas between the blocks that also articulates the entrance zone to the blocks. Lastly, a large multifunctional square connects both new residential clusters with each other and with the adjacent gallery flats.

central axis towards the stream valley

view from courtyard towards the slab

By using a common DNA for the architecture, a family of buildings is created that clearly belong together but at the same time are all unique. Both the blocks and the slabs are based on a rational typological system that allows for high degree of variations in terms of apartment types. In the blocks, each specific configuration of apartment types leads to its own building mass, that subtly differs The rational facades balance between solid and transparent, creating both an analogy and a contrast with the radical transparency of the gallery flats by Kempe Thill with which the project clearly seeks a dialogue.