research by design on sports in the city

With Studio Sport, Shift architecture urbanism shows how, where and why sport should be mobilized to boost urban quality. The result is a plea for hybrid urban sport places that are spatially and programmatically integrated in the existing city. They release sport from its isolated position, introvert character and mono-functional programming and charge the urban landscape with meaningful new places of (inter)action. 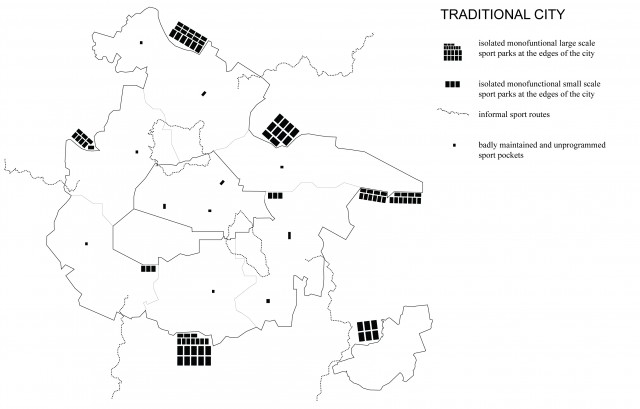 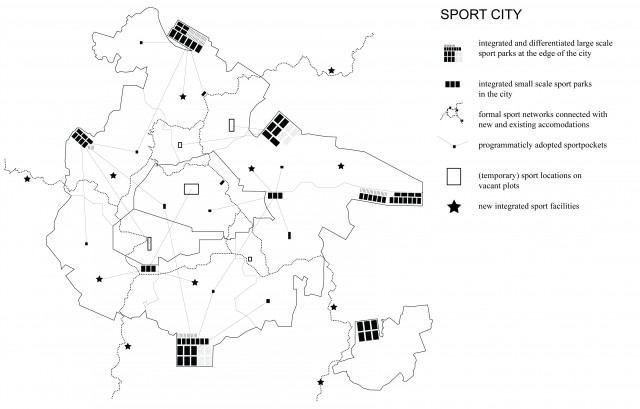 Sport is sexy and it’s everywhere. It is connected with fashion, music, lifestyle, media, the street and the city. If sport was once the exclusive domain of clubs and associations, these days it is an indispensable part of our society and daily life.

sport gets increasingly connected to city, fashion and individual lifestyle

mass sports events as a branding tool for the city

Sports and sportspeople are moving ahead too. The number of sports is growing fast, as is the so-called non-organized, spontaneous practice of sport, which takes place outside the context of the club, within the public domain of the city. This trend is expected to continue, as it corresponds to the need for flexibility of the modern urbanite.

development of sports in relation to society

Sport’s value for the community and the economy is getting major coverage in politics, the civil service and the media. Sport is good: good for your health, good for social cohesion, good for your image. Strikingly enough, the so called instrumentalization of sports has been overlooked by the spatial disciplines. Sport is subject of rest planning and its value for the city and its public domain is unexploited.

development of sports in relation to space

In the modernist city planning sports parks were allotted a place in the green zones sometimes in but more often around the city. The sports park was a way of escaping the hectic city.

designing the sports park as an escape from the city: Jan Wils, 1925

In later urban urban expansion schemes many sports facilities had to make way for new residential and work areas. As a result sports parks shifted ever further outwards to end up in isolated leftover areas and ragged edges of the city, often right up against motorways or railways.

the ‘islandisation’ of sports: situated in leftover areas around the city

This back-seat status held by sport in spatial planning has led to the ‘islandisation’ of sports that is completely at odds with the development of sports itself and the social and economical roles it got assigned by the outside world.

High time then, that sport’s key place in society is reflected in the way it is designed and integrated in the city. The question is what sport can mean for the city and, conversely, what the city can mean for sport. Sport can benefit the city and its public domain. It provides a counterbalance to the impoverishment of public space by charging it with activity and dynamic. Sport is one of the most powerful means to get people out of their protective home environment during their leisure time. It provides frameworks for encounter and interaction, two prerequisites for a vibrant public domain. In addition, qualitative sport facilities enhance a city’s attractiveness as a place for companies and residents to settle.

Also the city has to offer quite something to sport. First of all, large groups of city dwellers would like to sport close to where they live, especially in the “problematic urban neighborhoods”, where car mobility is limited and there is a large demand for sports. Secondly, the city provides the possibility to connect sports accommodations, that generally have a low intensity of use, to other urban functions in the field of education, culture and neighborhood facilities. Smart programmatic synergies lead to a substantial intensification of sports use in space ánd time.

In a series of concrete case studies in Rotterdam, The Hague and Amsterdam, developed in collaboration with the municipal departments of spatial planning and sports, Shift has explored the Dutch city for its potential to integrate sport on a structural level. The issue on the one hand is to stitch existing, often isolated sport locations to the city and on the other to integrate new sports facilities in the city.

The case study projects have resulted a new kind of urban typology: the hybrid urban sports place. In these places, several sports are combined with each other and with other urban functions. Their hybrid character is reflected in the balance that they seek between formal and informal, top-down and bottom up, commercial and public, inside and outside, sports and other programs.

They are designed as urban landscapes with an open and flexible character, rather than closed utilitarian facilities. They function on the level of the neighbourhood, the city or the region, depending on their size, program and position in the city. Despite their speculative character, the proposals have a high level of realism and they react to concrete urgencies. Three case-study designs have led to further spatial and financial feasibility studies, commissioned by the municipalities or other stakeholders.

In addition to the case study projects, the website sportspace.eu was developped. SPORTSPACE is an online platform about urban sports spaces. The website collects reference projects of sports and movement spaces that are successfully embedded within the city and connects these with spatial design tools. It functions as a source of inspiration and a frame of reference for everybody who’s interested in the potential of sports for the city and vice versa.

The full body of work of Studio Sport was exhibited in the New Institute (former Nai) in Rotterdam. The exhibition was openend during a conference in which specialists from the domain of sports and space were triggered to participate in a constructive dialogue.